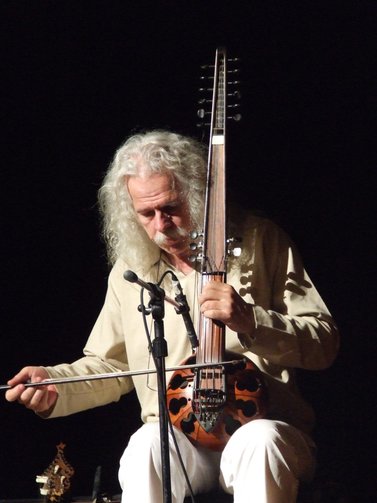 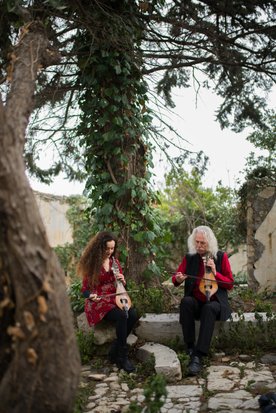 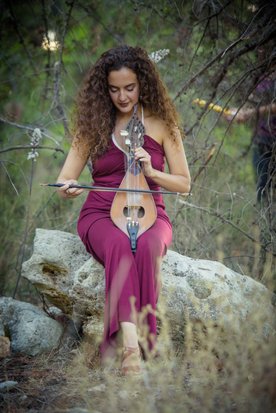 Ross Daly together with his fellow musicians, will present a program that includes his own compositions belonging to the genre "Contemporary Modal Music". These compositions reflect his long journey through the broader range of musical traditions of Modal Music that extends geographically from Northwest Africa to India. Ross Daly is the founder and artistic director of the Labyrinth Musical Workshop in Crete, which annually brings together hundreds of students and teachers from around the world to seminar circles that offer a unique experience of learning the musical traditions of the entire range of Modal Music.

Many years before what we call “World Music” appeared on the scene, certain individuals had already understood the enormous value and vast variety of the world’s various musical traditions and had dedicated their lives to their study. One such person is Ross Daly.

Although of Irish descent, Ross Daly does not really fit into any particular ethnic stereotype given that his life has been spend in many different parts of the world and his home for the last 35 years is the island of Crete in Greece. Ross Daly, at a very early age, discovered that music was, in his own words, “the language of my dialogue with that which I perceive to be sacred”.

This dialogue eventually led him to the great modal traditions of the Middle East, Central Asia, and the Indian Subcontinent where he finally found the musical archetypes that he had been searching for all his life. In these traditions he encountered music which was not merely a vehicle of self expression, but which was able to take one beyond what one normally perceived to be the boundaries of one’s self into other transpersonal realms of experience.

This discovery changed everything in Ross Daly’s life and he subsequently gave up all other activities and dedicated his life to the study of the innermost secrets of these musical traditions as well as to the art of composition. He subsequently travelled extensively, studying under many of the world’s greatest masters of modal traditions. Since 1975 he has been based on the island of Crete where he is universally recognized as one of the foremost experts on the island’s rich musical tradition.

Although of Irish descent, Ross Daly does not really fit into any particular ethnic stereotype given that his life has been spent in many different parts of the world and his home for more than 35 years has been the island of Crete in Greece. Ross Daly has traveled the world, mainly in the Middle East, Central Asia and the Indian subcontinent, studying various forms of local music traditions. In these traditions, he encountered music that was not merely a vehicle of self-expression, but music that was able to take one beyond what was normally perceived to be the boundaries of one’s self into other trans-personal realms of experience.

In 1982 he established an educational institution called Labyrinth Musical Workshop, in Houdetsi, Crete. More than 250 instruments that Daly collected during his travels are on show. Since 2002 seminars and "master-classes" are conducted every year with some of the greatest teachers of traditional music from around the world. It is a meeting point for musicians and students and is recognized as the leading institution in Greece today, in the field of education of modal and traditional music in general.

Ross Daly is the originator of the term Contemporary Modal Music, which refers to contemporary compositional works which draw their influences and inspiration from the broader world of Modal musical traditions which are found primarily (although not exclusively) in the vast geographical region between Western Africa and Western China.

Ross Daly has released more than 35 albums of his own compositions and of his own arrangements of traditional melodies collected during his travels. The latest ones are the following:

Ross Daly has performed in many important venues and festivals such as:

“The compositional genius of Ross is beyond description.” Dani Heyvaert

“Lunar is a fascinated mix. The legendary lyra player Ross Daly and the equally brilliant musician Kelly Thoma have put together a very personal homage to the moon as an inspiration and a source of mystery.” Maria Lord, Songlines

“Ross Daly is Irish by birth but cosmopolitan by calling. After travelling the East, to get to know and master the music and the instruments (he owns 250 of them!), he settled in Crete almost forty years ago, where he established Labyrinth to study, play and teach masterclasses, focusing primarily on the Cretan lyre. Among his students, some of whom acquired fame of their own, we find his young wife Kelly Thoma, technically almost his equal. […] ’Lunar’ is a magisterial tour de force, a journey to the moon in thirteen richly variegated pieces, in which East and West embrace each other intimately. They demand the listener to really engage, but the effort will pay itself back hundredfold.”
Antione Légat

“An oasis amid the wasteland of arid, bloodless sounds, it was lush with exotic instruments and time signatures, original and traditional compositions, precise ensembles and meaningful improvisations.”
John Shand

“Many of Daly’s own compositions follow a tradition found in Indian and certain Turkish & Cretan music of a restrained and disciplined progress towards a crescendo. I have never heard this effect more than on this interpretation of Pendozalis. The piece works incrementally, moving forward in steady steps and frequently taking one back, thereby heightening the sense of tension and expectation.”